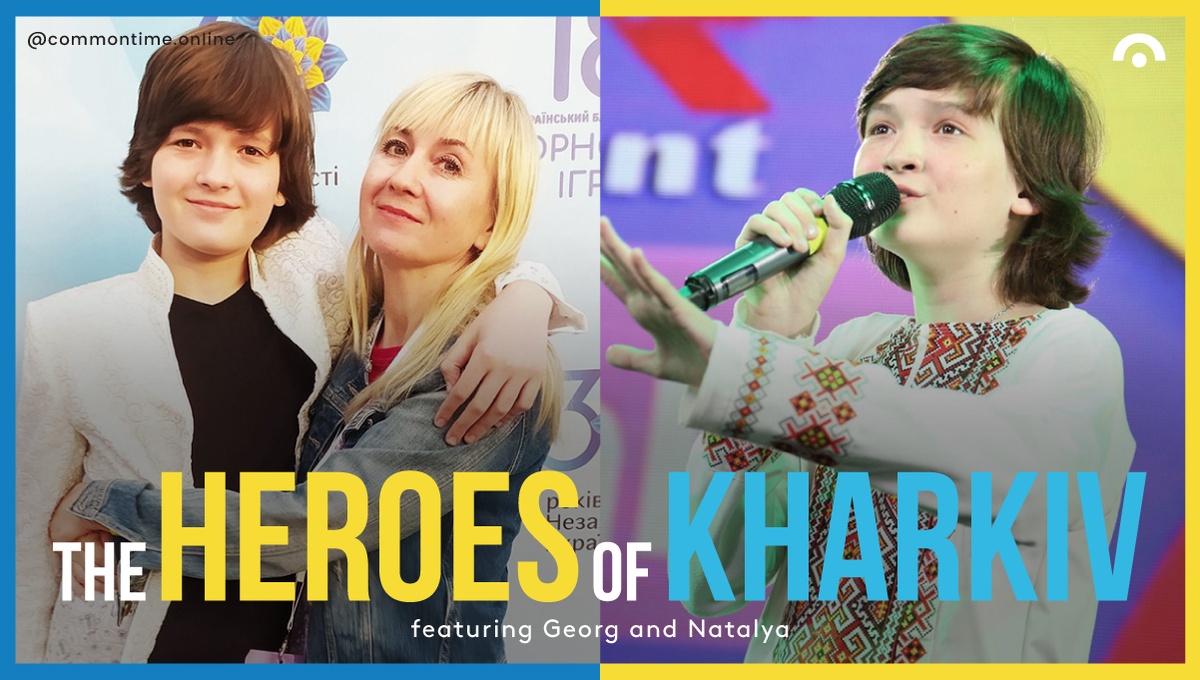 The Heroes of Kharkiv, featuring Georg and Natalya

Nestled in the Ukrainian countryside, 14-year-old powerhouse vocalist Georg seeks safety in the presence of family. Georg details his love for pop music and lyrical singing; he draws inspiration from Rock-n-Roll artists across the world. Like any proper 14-year-old, his favorite band is ACDC. Georg’s musical origin story is one of pure chance, spawned by a one-off experience with the vocal group at a local classical music venue when he was just 4 years old. Luckily for us, Georg’s teachers recognized his talent and referred him for specialized vocal lessons. Those teachers confirmed what the vocal group teachers thought, thus setting Georg on his newfound path. As Georg puts it, “the rest was history.”

Georg is accompanied, always, by his loving mother Natalya. She explains that “the parents and the family must immerse themselves in the environment and live the same life as the child.” Georg’s entire family is fully invested in his journey. From taking him to rehearsals, to attending concerts, to aiding in preparation, they are “one big team,” Natalya says. Oh, and they love Whitney Houston!

Despite their bright demeanor, Georg and Natalya told us of the cloud hanging over their heads and the heaviness in their hearts. The news from Ukraine has filled the front pages of outlets across the world. But those headlines are nothing compared to the reality that Ukrainians are facing. As Georg and Natalya say, “there is nothing to put them into a good mood.” Etched into their memories are the innocent men, women, and children who met their demise. “Bombs, falling like rain.”

For one week we sat under the bombings in a cellar. Constant bombing. Our city was being bombarded. The air strikes, the bombing, they were very heavy. In front of our eyes we saw people dying. We saw houses burning. When the fighter jets started flying over, I could not take this anymore. We decided to move to the middle of the country. I felt like we needed to go so I could save Georg. He had recently been sick. He had an oncological diagnosis. To stay in this constant stress could have led to his cancer relapsing. Then, we got to Bulgaria until recently. Then, we came back to Ukraine. We could not go back to our home city. We moved into the middle of the country where we have family. This is where we are now. For the international community, we would like you to know that Ukraine is a small country. But, it is a very courageous country. We want to live in peace. The Ukrainian people are very kind.

Kharkiv, described as a “Hero City” by Natalya, is where the duo call home. The term “Hero City” is not used lightly. Publications like The Guardian refer to Kharkiv as “defiant” – an apt descriptor as residents like Georg and Natalya are returning home despite bleak conditions.

Watch the full interview with Georg and Natalya below:

Silver linings are hard to find in this story, but the beauty lies in the connections we build – in a community bound by the Arts. It shines through in Georg and Natalya’s stories of their family’s efforts to support Georg’s musical talent. Georg’s commitment to pursuing his singing in the face of adversity and Natalya’s dedication to her son’s dreams place the two alongside the heroes of Kharkiv.

Georg feels the same way. He is not currently working with a vocal teacher, but his passion for music has not been dampened. He sings alone for the time being. And even though he shows so much promise, he can hardly afford to think of his future; indeed, the future is a luxury many of us take for granted. Nevertheless, Georg has dreams like any ACDC-loving, 14-year-old singer would. He wants the popularity, the fans, the large stages. He wants it all. (At this, his mother tries to humble him by insisting that those dreams only come true with further study. They’re a team, through and through!)

When thinking of ways to encourage other children to pursue their dreams, Georg warns that nurturing talent is no easy feat. He explains how studying voice taught him to take things seriously. He lists rehearsals, learning solfege, studying literature, singing in a choir, preparing for competitions, acting and choreography as key parts of the art he creates. “A singer is first and foremost an actor,” according to Georg.

Georg allowed us to showcase one of his songs, titled “Посміхнися, доле!” (“Smile, fate!” in English). This song features him in a wooded area, clad in traditional Ukrainian clothes. His smooth, soaring vocals sit atop a somber piano accompaniment as the camera pans out to show expansive views of the Ukrainian landscape. Georg’s voice is like butter as he easily reaches up towards the higher part of his register. With the clarity of a seasoned vocalist and the swagger of Tom Cruise, Georg is destined to achieve great things – if not the dreams he set forth, then something much more!

This song is about how I went through some difficulties in my life, in my faith and remained able to smile.

This sentiment is especially fitting now.

Georg and Natalya’s final message to the larger international community is this:

They should support each other. They should only believe in the good. Our thoughts, they are material. Absolutely, definitely, believe in peace. That people need each other. They need to see each other in their own streets, their own houses. Believe that they will live like before, maybe better than before. To the whole world, we would like to say thank you for everything you are doing to support us.

On August 14th, Georg will be performing in a live concert right here on CommonTime. Proceeds from this concert will go directly to Georg to help support his continued vocal education. To purchase tickets to Georg’s concert, click here.

Michael and Christine from CommonTime, Sondra from the World Children’s Choir, and Olya the translator met Georg and Natalya on CommonTime. Our connection came through Sondra and her charity efforts on the platform, Prayer for Ukraine. As part of her World Children’s Choir, Sondra is hosting rehearsals on CommonTime for singers of all ages to teach them to sing in Ukrainian and collect their voices in support of a fundraiser. Attend a weekly rehearsal with Sondra to learn the song Molytva za Ukrayinu, the patriotic and spiritual anthem of Ukraine. After learning the song (or if you already know it), record yourself singing and upload your video. All of the recordings from around the world will be combined into a single recording, paired with a video, and then livestreamed on CommonTime. 92.5% of the proceeds from this concert will go to benefit NGOs focused on Ukraine. Click here to register. Your voice will make a world of difference.

Through our virtual connection with Sondra, we established a real life connection with Georg and Natalya, who are working to stay safe, support their homeland, and keep the music alive.

Since this interview, Georg and Natalya have traveled to the UK and are staying with a host family. Sondra has been kind enough to continue Georg’s vocal lessons pro bono. Georg has been able to reconnect with his vocal teacher from Ukraine, and he hopes to resume lessons with them in the near future. Georg and Natalya are safe.

The CommonTime Team would like to express our immense gratitude to Georg and Natalya. We share in their vision. Peace will return to Ukraine. And the people to their homes.

We would also like to thank translators Olya and Michael for facilitating the conversation across languages, Lilya from Germany for translating and helping to house displaced Ukrainians, Georg and Natalya’s host family in the UK, and everyone else who has helped to support Georg and Natalya and make this story possible.

To see more of Georg and his amazing voice, check him out here.

To book a vocal lesson with Sondra, visit her artist profile.

Thank you for pausing and for reading, commenting, and sharing Georg’s story.